E5 Bakehouse – with a light dusting of Hollywood 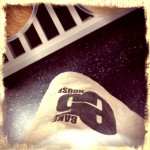 On Saturday I had an inspiring, enthralling and exhausting day baking bread in a railway arch in Hackney. My dad very generously bought me a one-day course at the E5 Bakehouse as a birthday present back in October last year, and it’s so bloody popular that March 16 was the earliest I could book. And now I know why.

Of course baking is pretty high on peoples’ lists of fun things to do right now, what with Mary Berry and Paul Hollywood (more of him  later) and their tents and competitions and cakes making us salivate on the BBC (not that I’ve ever watched the Great British Bake Off actually, though I bet I’d like it if I did). But I think it was a few things that had nudged me in the direction of the E5 Bakehouse: I had tasted their fabulous sourdough at a nearby restaurant or two; I’m currently experiencing a desire to get ‘involved’ somehow in time-tested ways of making food and drink; I have tried a couple of times to bake bread before and failed miserably.

So here I was in a cosy arch, trains rattling through London Fields station overhead, with nine other baking wannabes, all of us agreed that this was the perfect place to be on such a grim day – it was peeing it down outside. 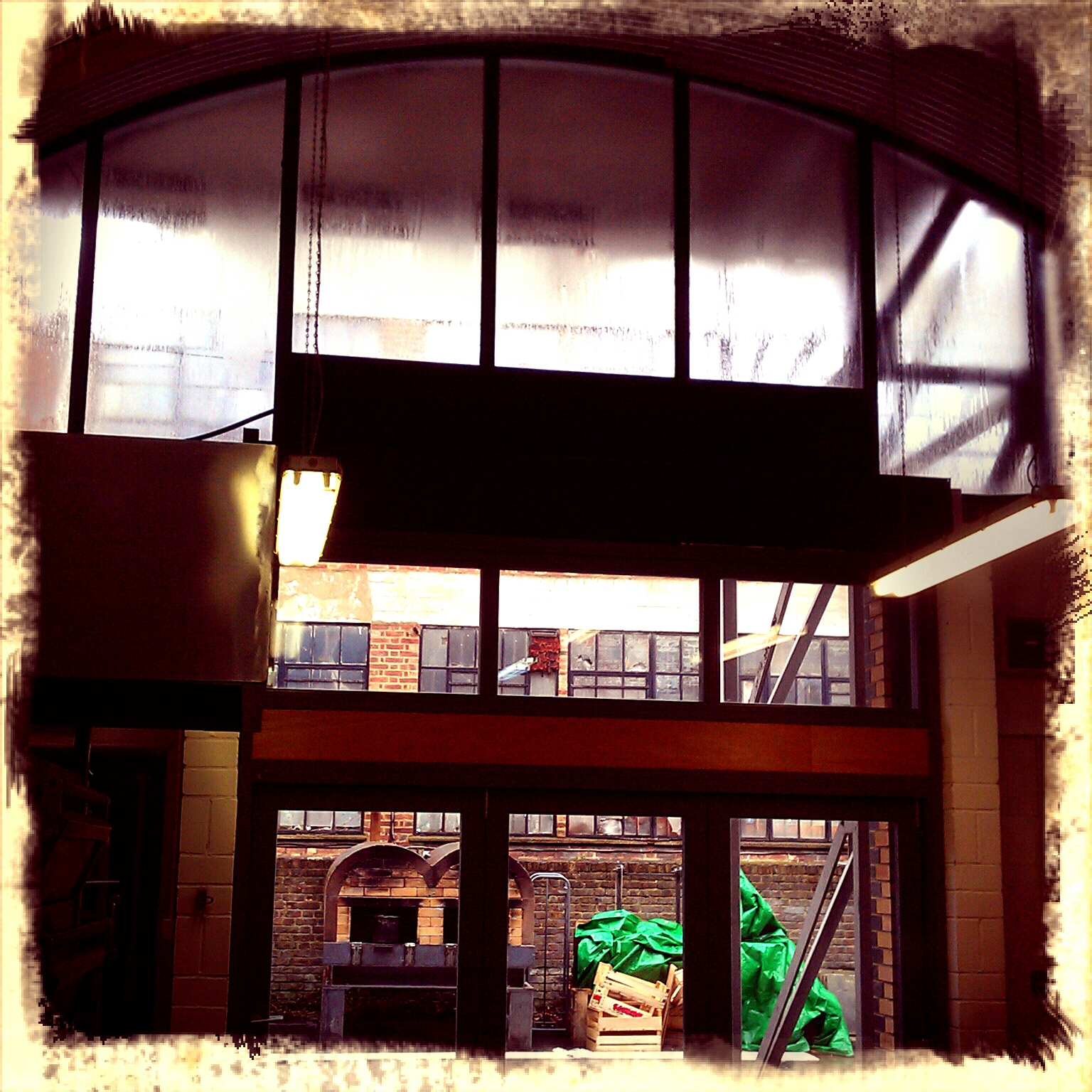 Once we’d all talked about the weather for long enough, the lovely Ben Mackinnon (founder of the bakery), in between fielding our endless questions and telling us about his needy new kitten, got stuck into teaching us how to make sourdough bread.

Sourdough uses a ‘mother’, also known as a ‘starter’ or ‘levain’, instead of baker’s yeast, to cause the bread to rise. Now, Ben did explain a lot of the science behind this and I am vaguely aware of how it all works, but since Wikipedia exists, I reckon it’s safest to let them take the blame for any misinformation, on their Sourdough page. Suffice to say, it’s the oldest baking method there is and, appropriately, the mother they use at E5 is more than 200 years old. Cool.

So I have discovered that grams and ml are the same, at least when it comes to water. Did you know that? I feel like I ought to and that I might be showing myself up as a complete dunce, but that’s just one of the facts I’ve picked up from my past few days’ bread-related activities.

This might be a good point at which to introduce another type of fact, the Hollywood Fact. Fired up from my weekend antics I sat down on Monday night to watch the new BBC2 programme Paul Hollywood’s Bread. This lady in the Mirror gives it quite an amusing write-up. I particularly likeed the historical tidbits and facts the researchers had sprinkled throughout the show.

Hollywood Fact #1 A single grain of wheat produces 20,000 flour particles. At least I think that’s what the miller said.

Anyway, back to London Fields, where Mr Hollywood had in fact visited recently, Ben told us, to film a section for his show where he made bagels (the world is full of delightful links).

We made four different types of bread: a rye, the E5’s Hackney Wild sourdough, ciabatta and bagels (like Paul). It was a process of measuring, mixing, proving, kneading and then doing it all over again, with four different bowls of dough. Times eleven (ten students + one actual baker). Ben is a master of maths for having worked out how to put all the timings together to produce a six-hour day where everything runs smooth as you like and there’s time for a cracking lunch: 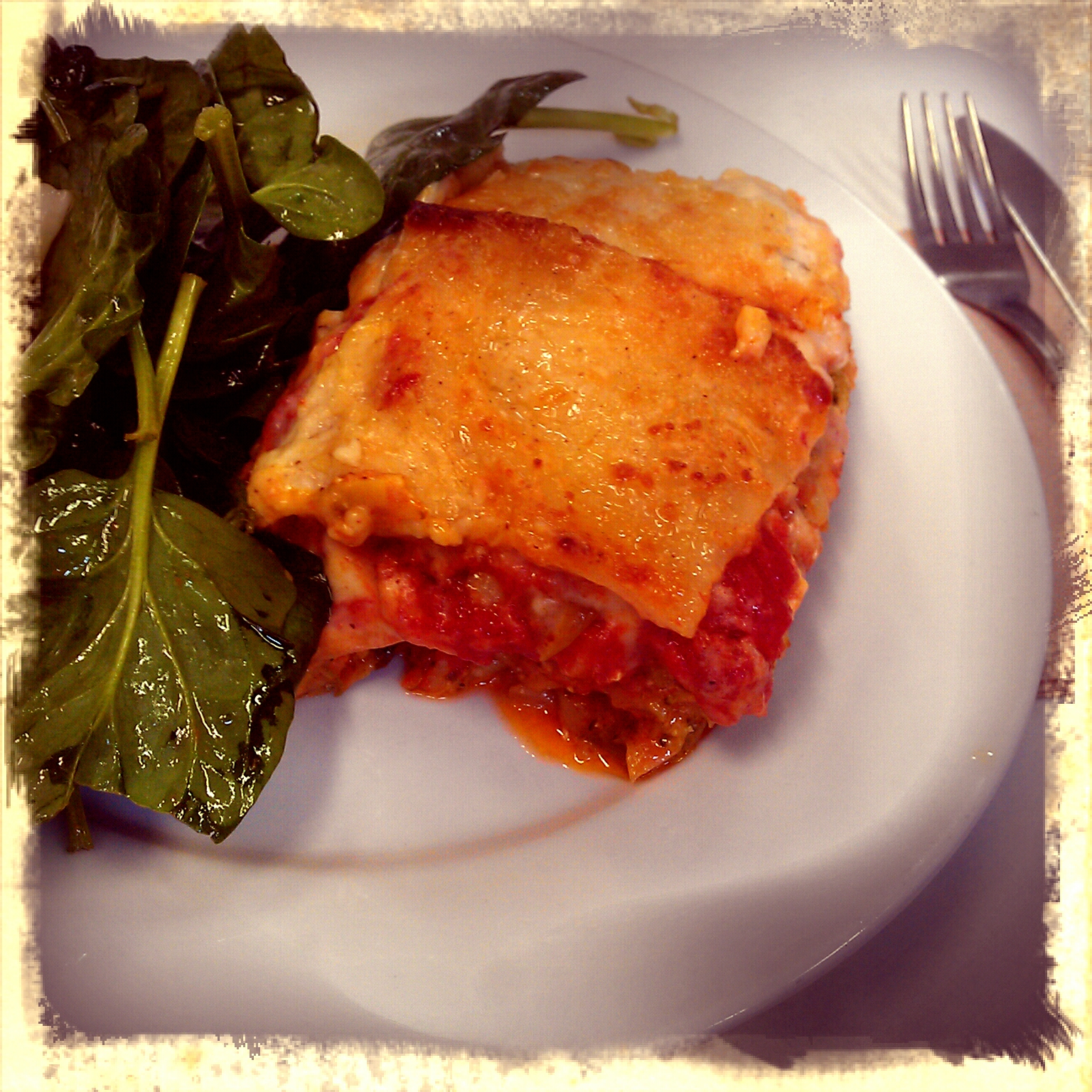 Possibly the best veggie lasagne I’ve ever tasted. I tried to steal the recipe.

Anyway, what you really want to see is pictures of bread, right? Of course you do. So here are some.

First step: stick your hand into a bowl of mother and measured-out water and swish it all around a bit to break it up. This is the rye mother – doesn’t look massively appetising at this stage, does it? But it’s what makes the bubbles that make the bread rise. Which handily introduces…

Hollywood Fact #2 In Tudor times the beer-brewing process married with that of baking when it was discovered that the ‘barm’ that formed on the top of fermenting ale could be used as a raising agent for bread. This also gave us the word ‘barmy’: full of barm, frothing, excited, flighty, a little bit bonkers. 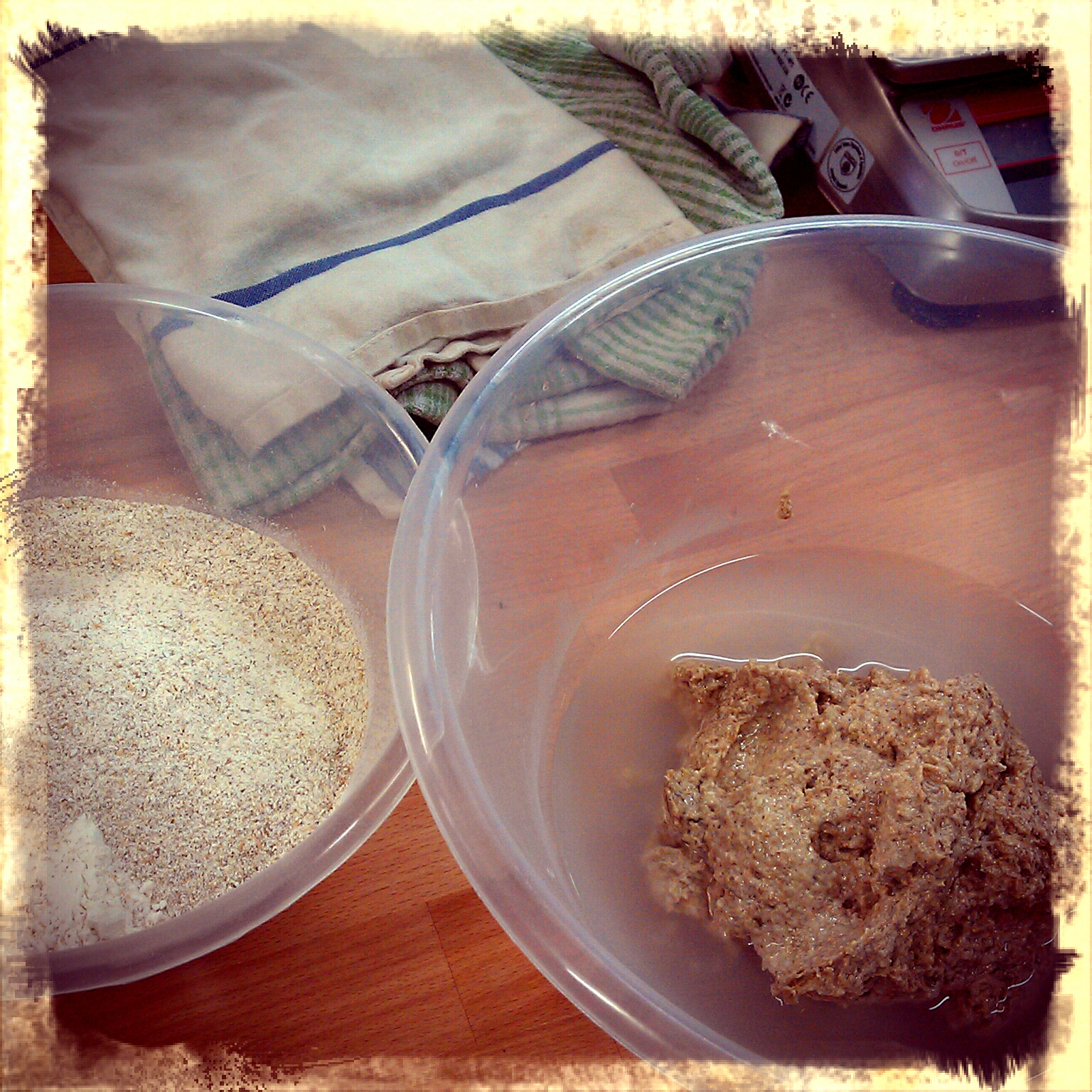 The ciabatta mix also got a slosh of olive oil. Looks even less appealing? 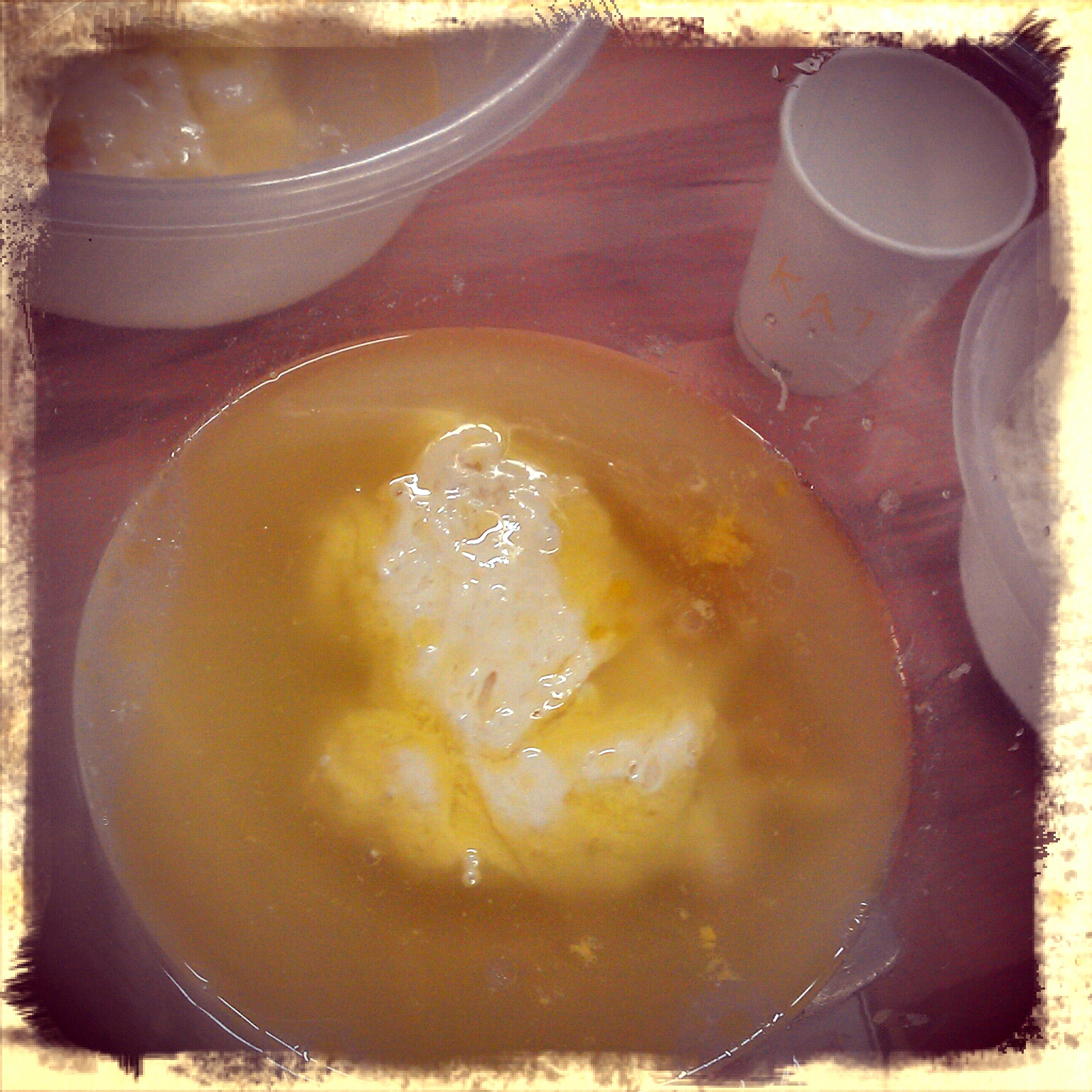 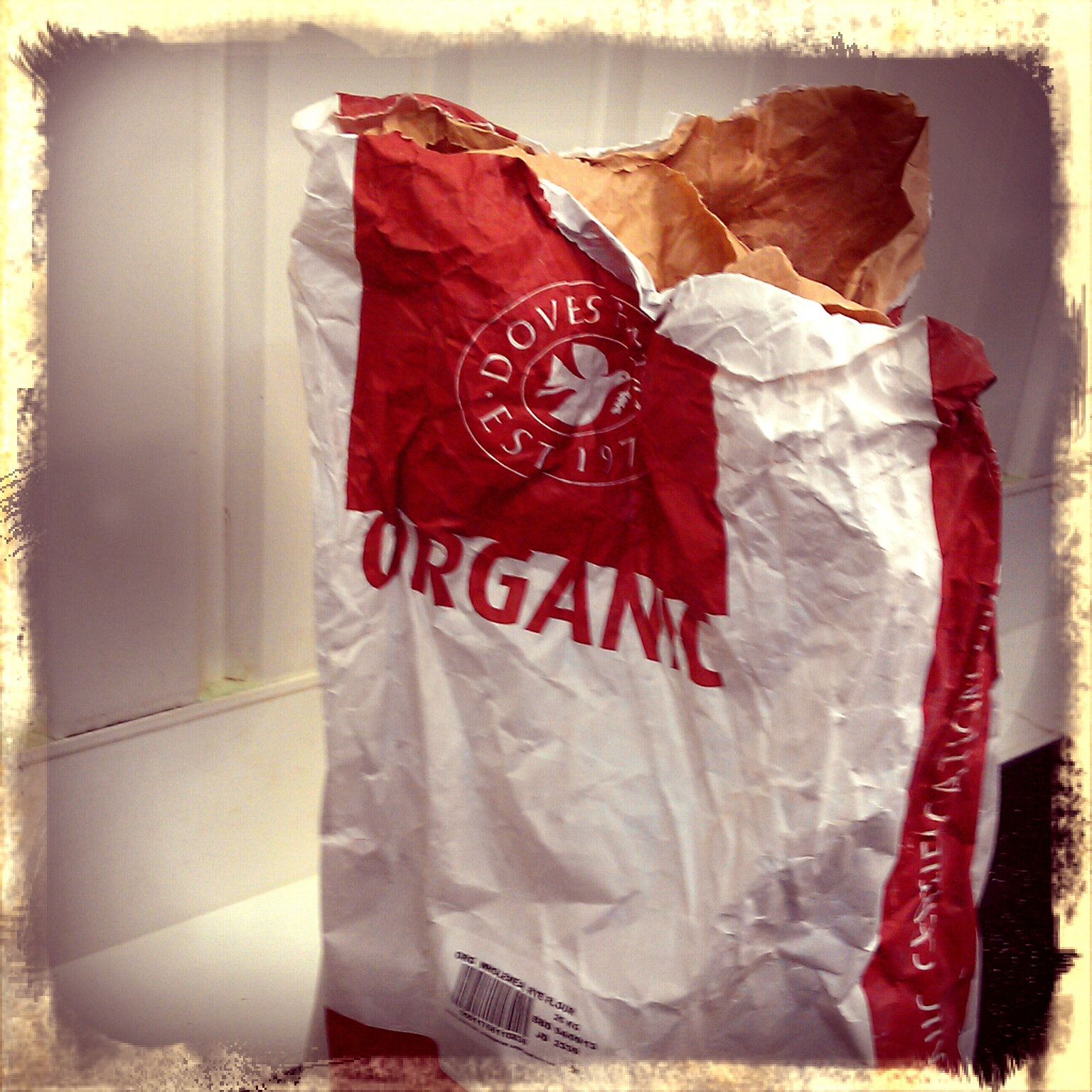 Which brings us to…

Hollywood Fact #3 The phrase ‘grind to a halt’ originates in the flour mill. If too much grain pours from the hopper into the grinding mill it stops, you see.

So anyway, we mixed and pummelled and proved. Here’s some of the many bowls sitting doing their thing under the table. 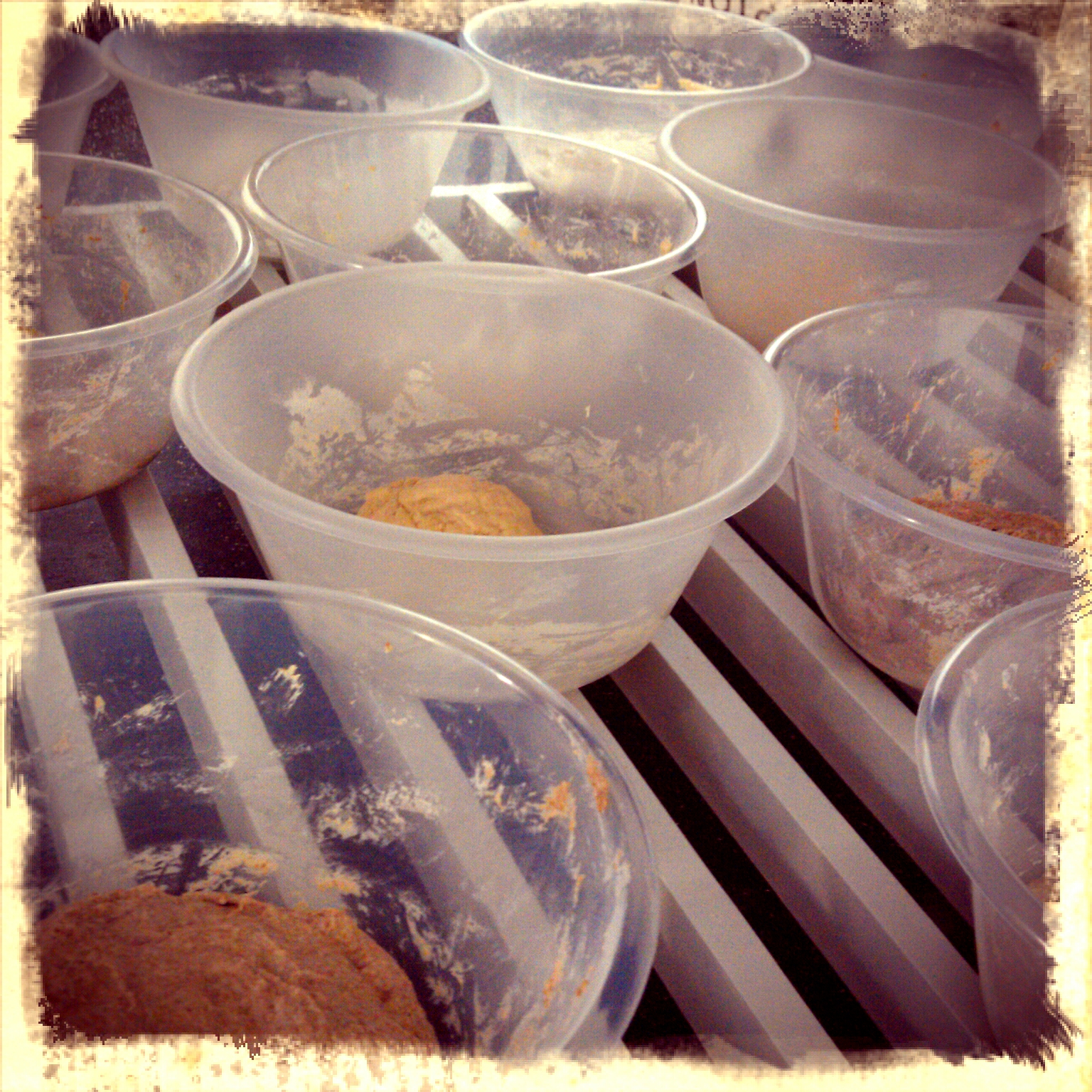 Oh yeah, there were cakes at lunchtime too. See how heavenly they were. 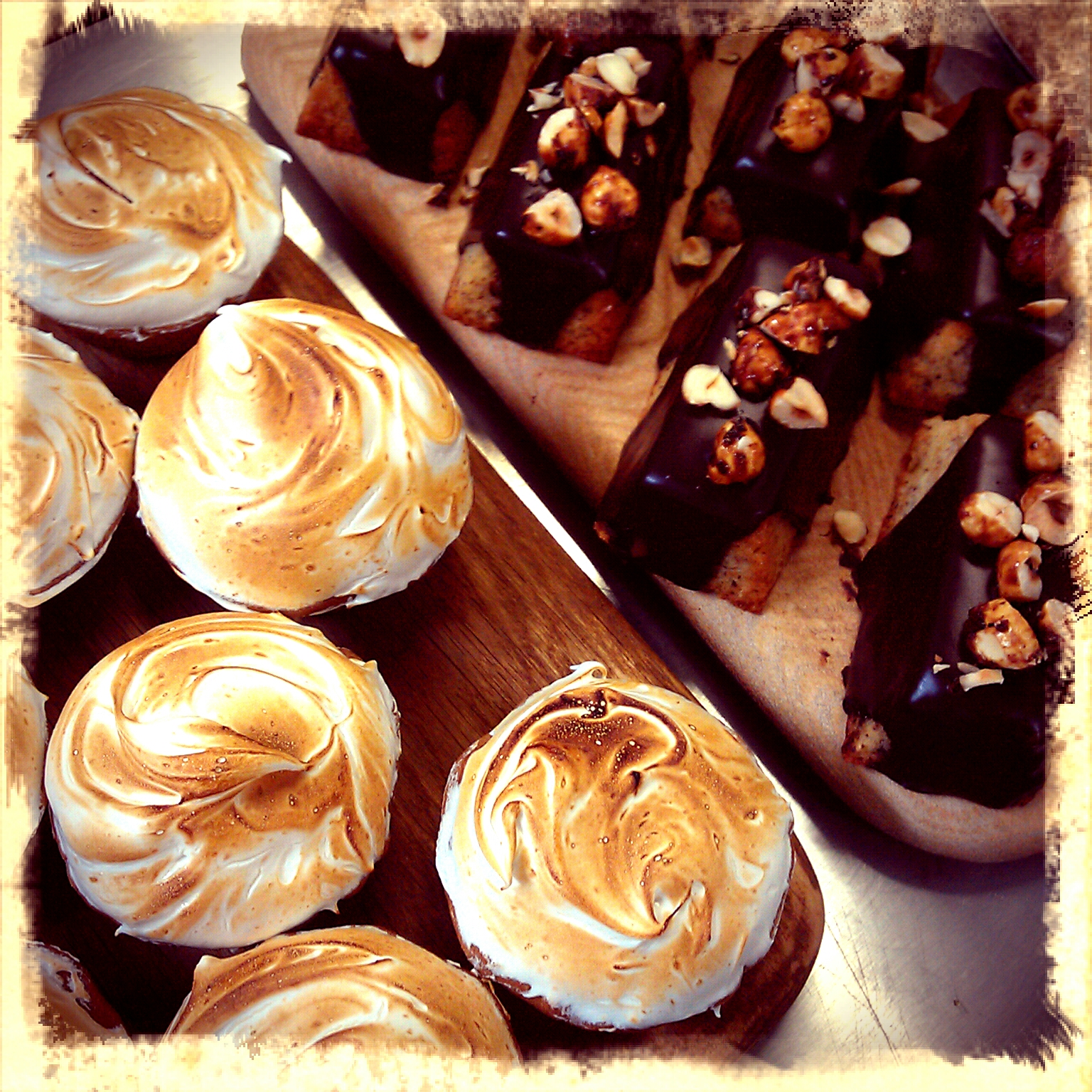 This is what the bagel dough looked like. Pictured with my new toy – the dough scraper/cutter, i.e. a v useful piece of plastic. 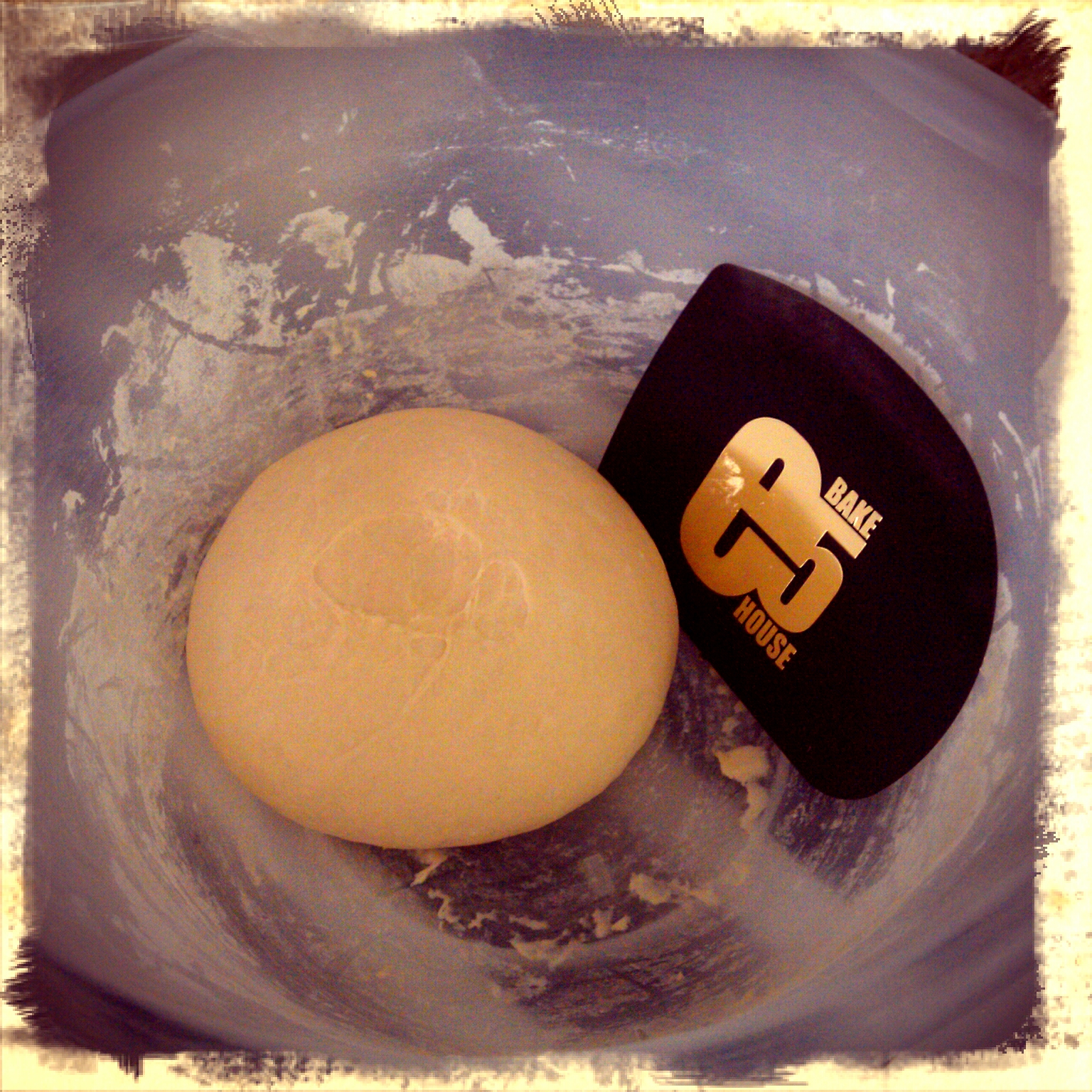 And this is the rye dough. Handsome bugger. 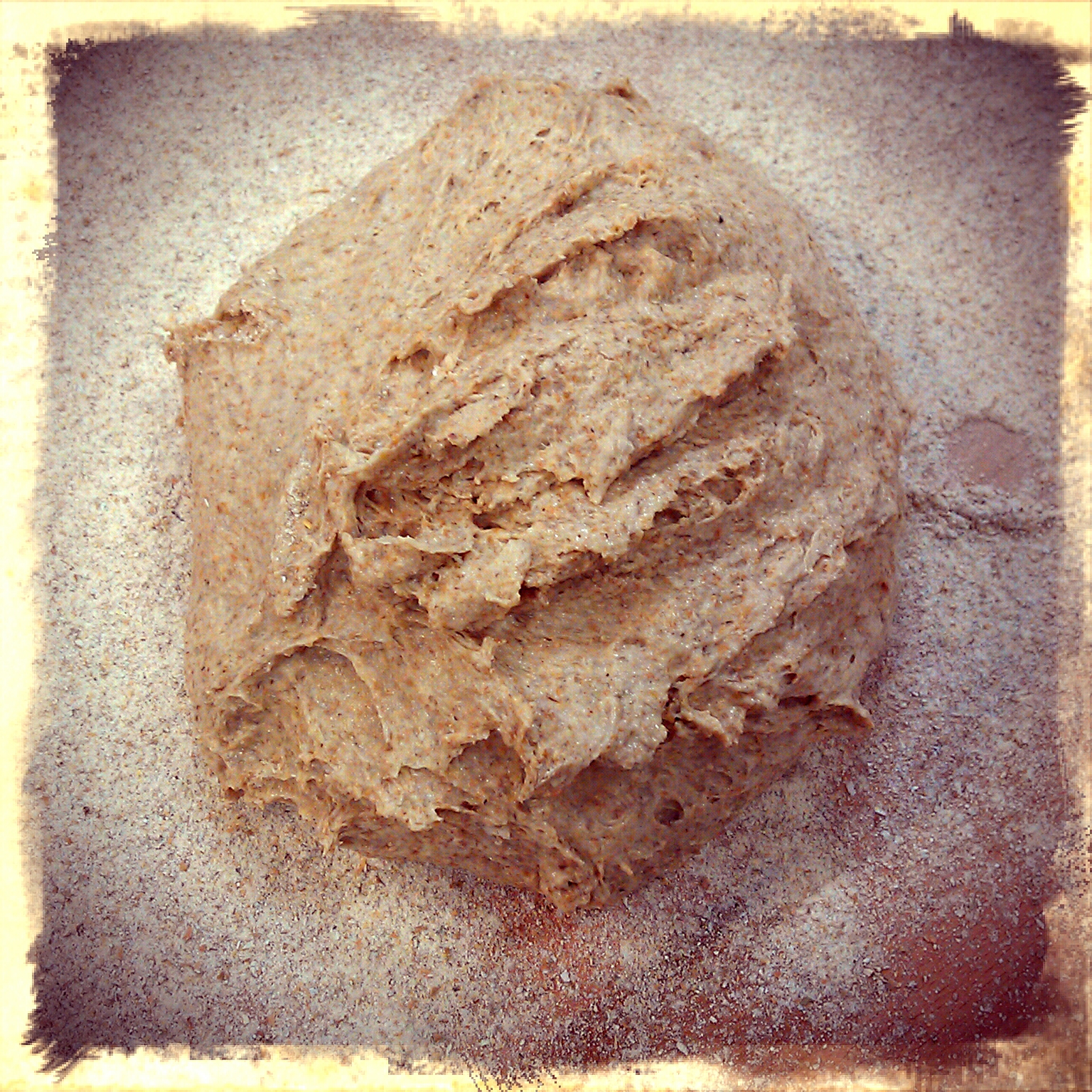 The rye goes into a ‘banneton’ for its final proving, the bagels get holes punched into their middles (finger in, twirl it around, pizzaiolo style) and they sit on a shelf for a while. 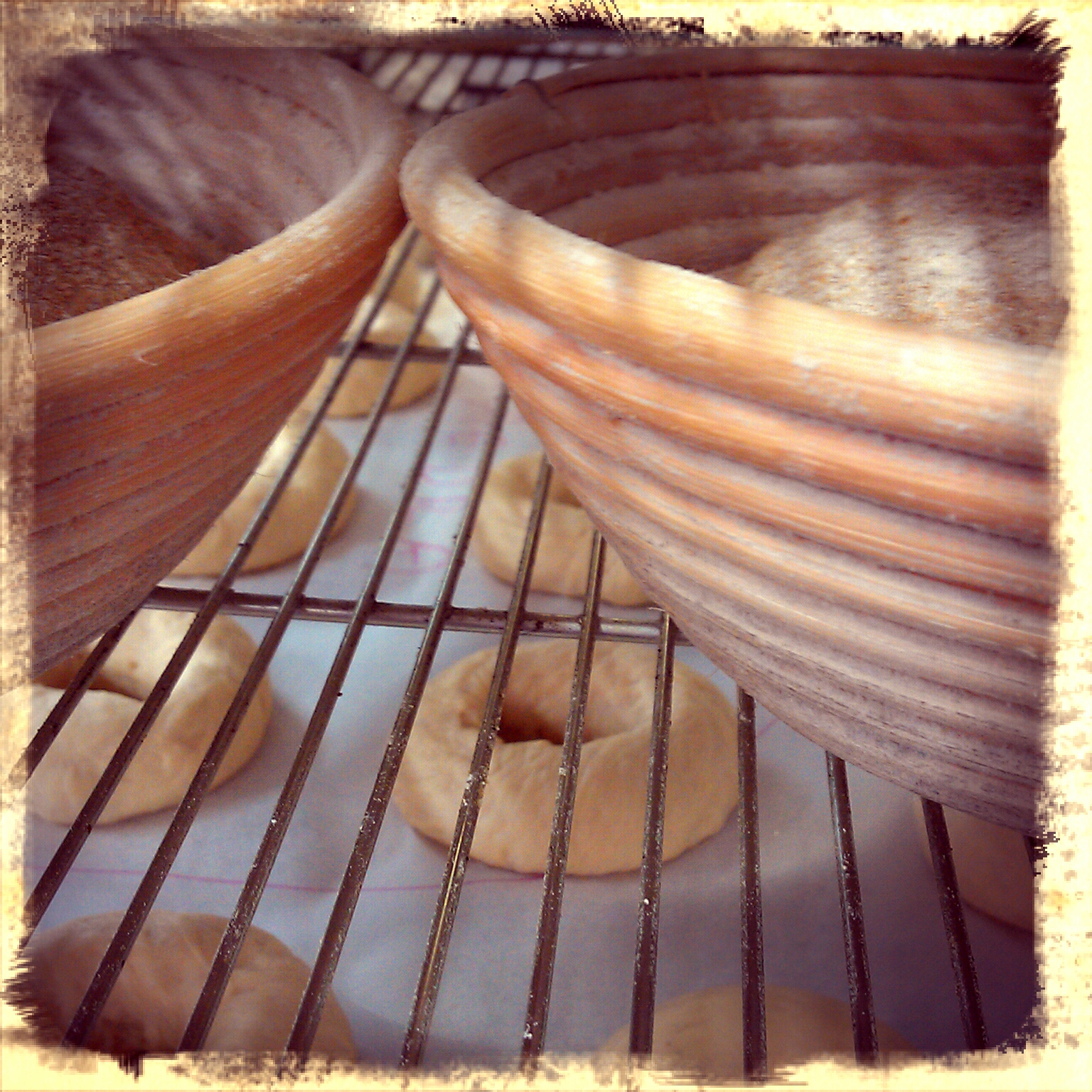 The ciabatta undergoes some folding business, and then also gets put on a shelf. 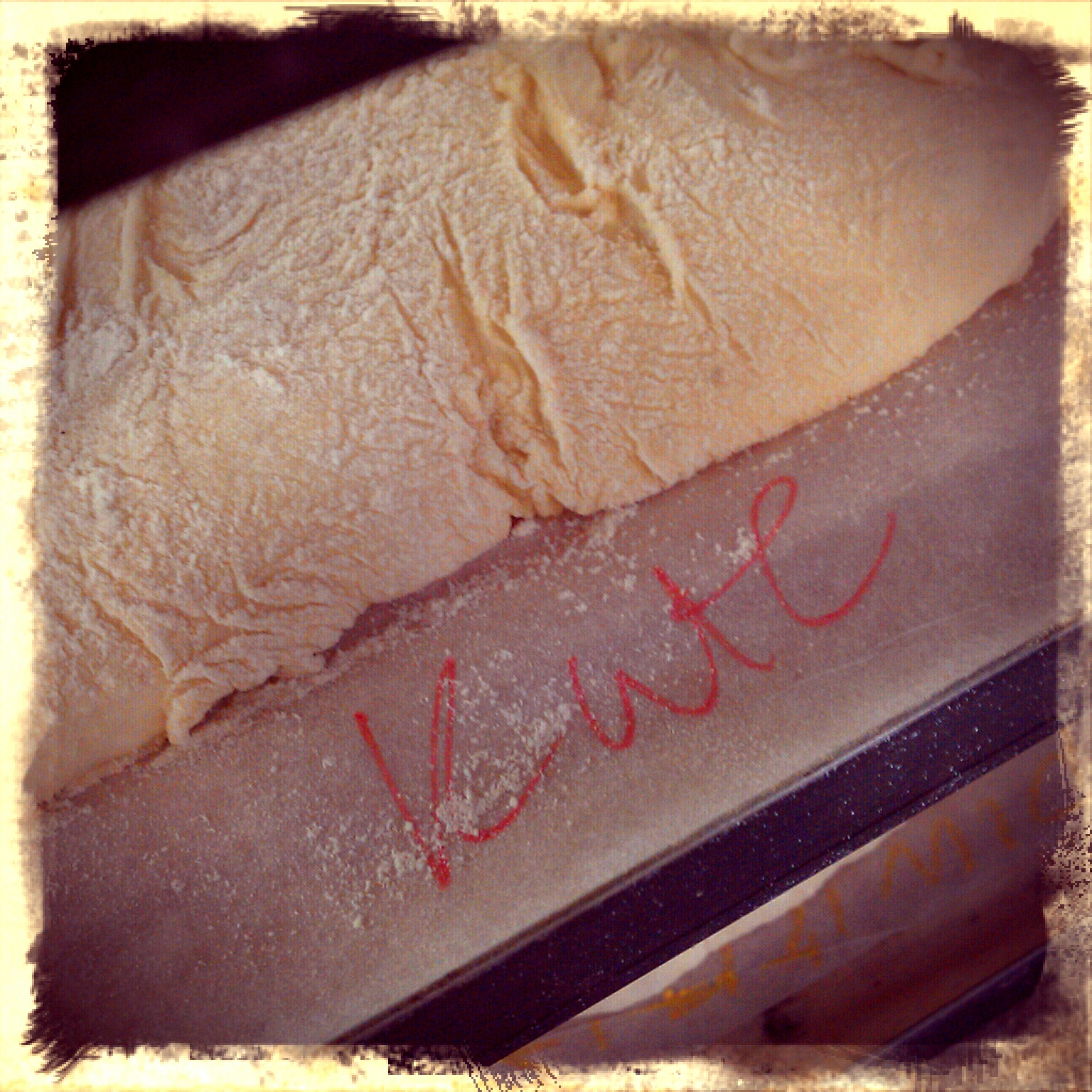 The bagels then get boiled. Yes, boiled! briefly, so they puff up a bit. 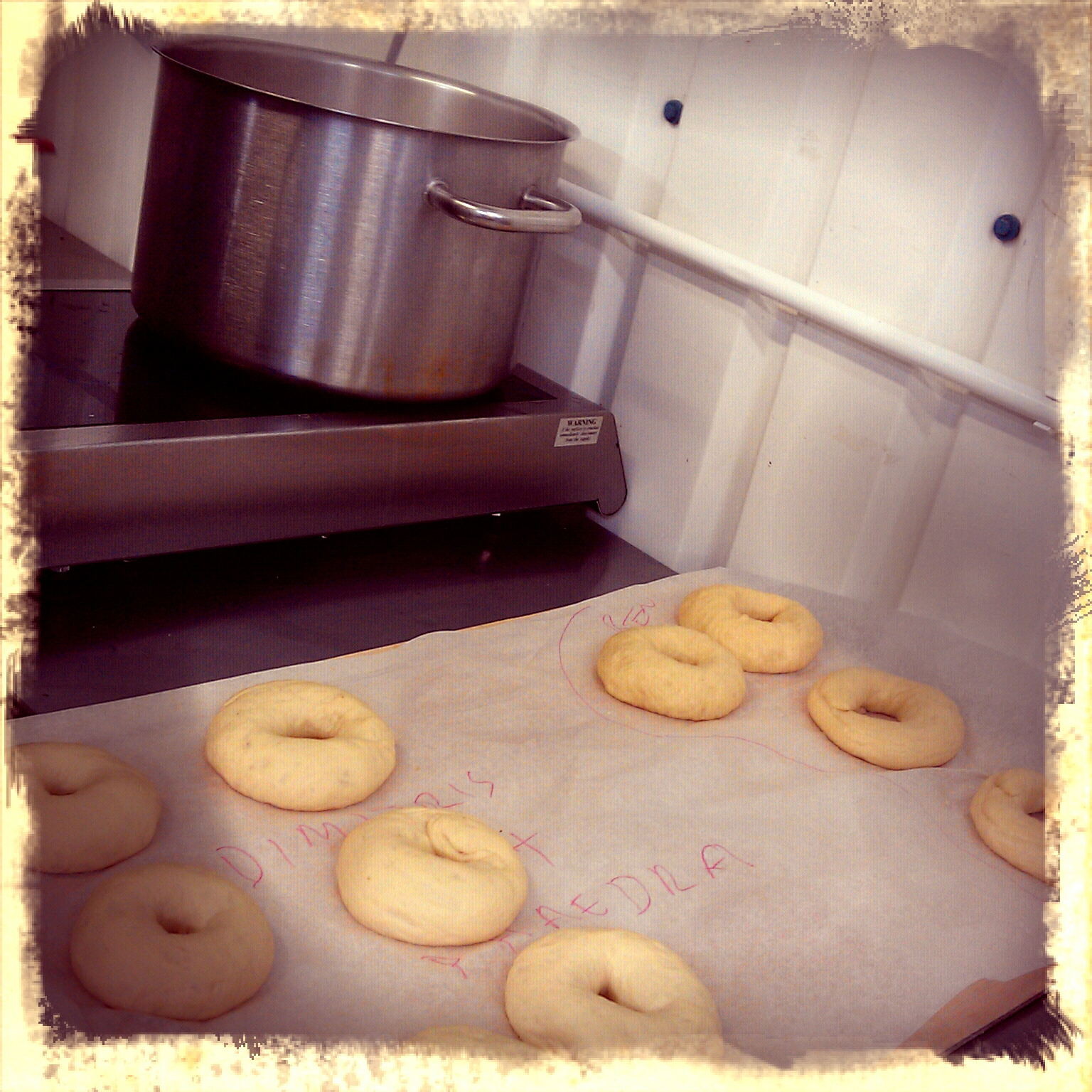 The rye loaves are turned out of their bannetons, and the folds where the dough has been gathered form handy little channels, meaning there’s no need to score it to help it rise. 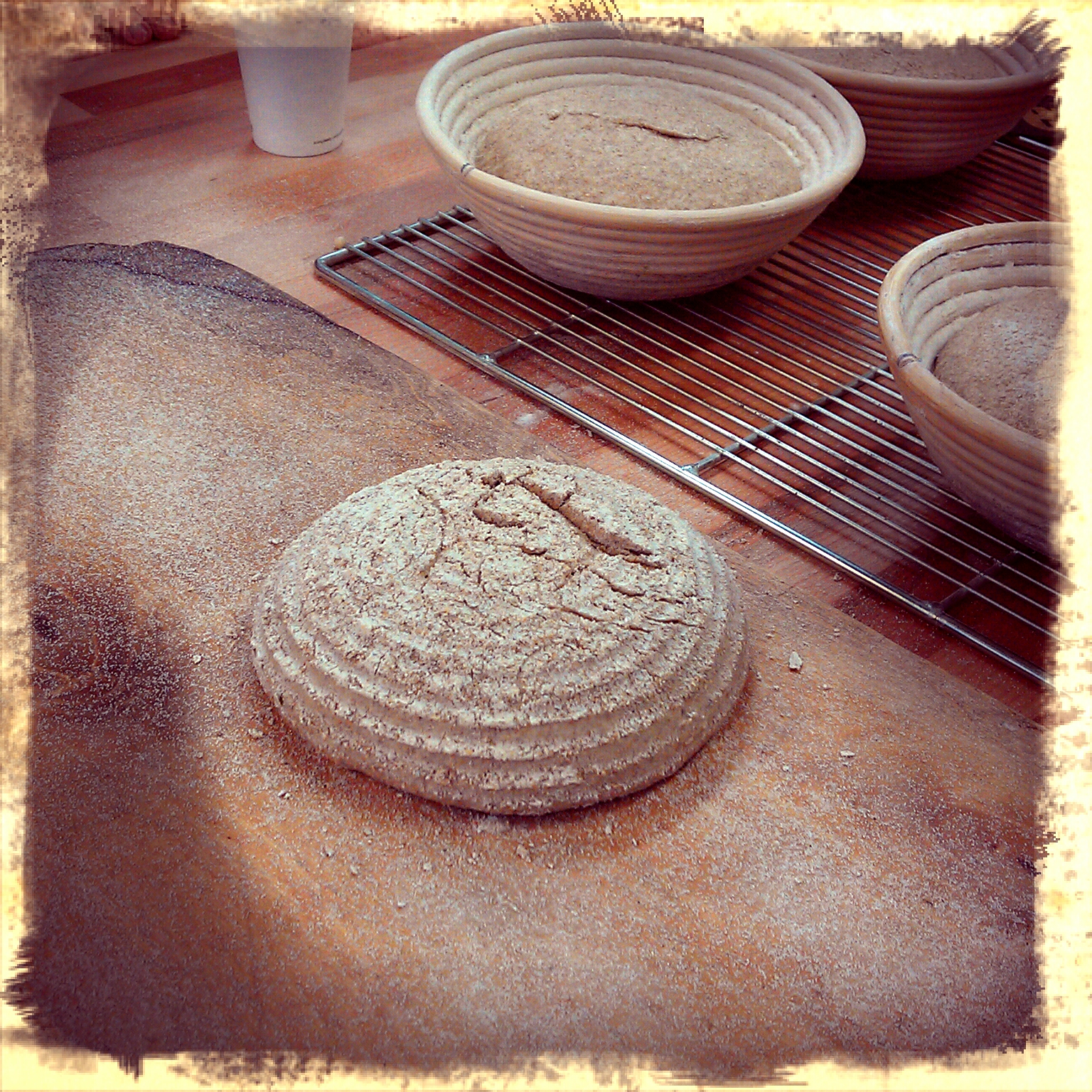 Then everything went in the oven. And came out looking like this. 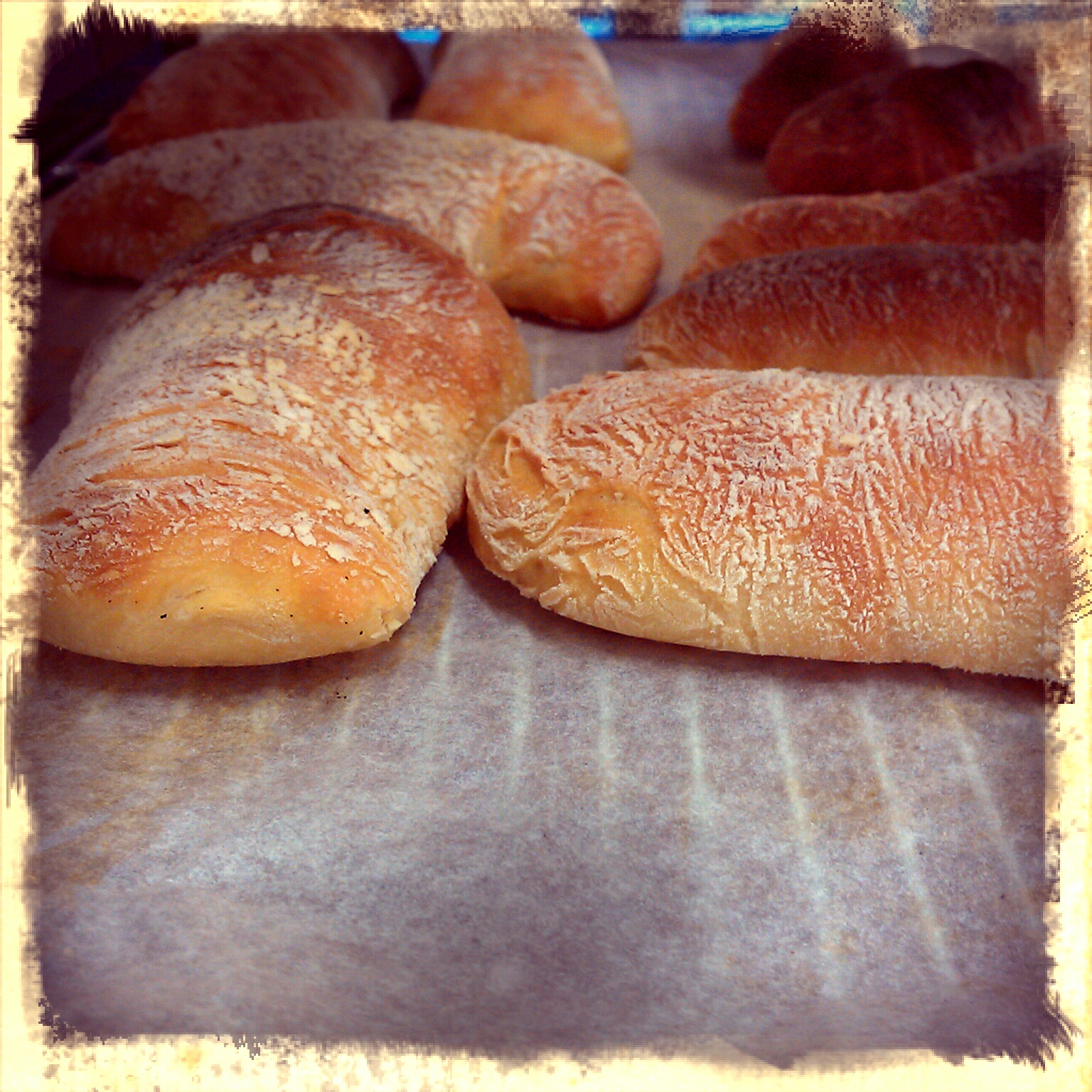 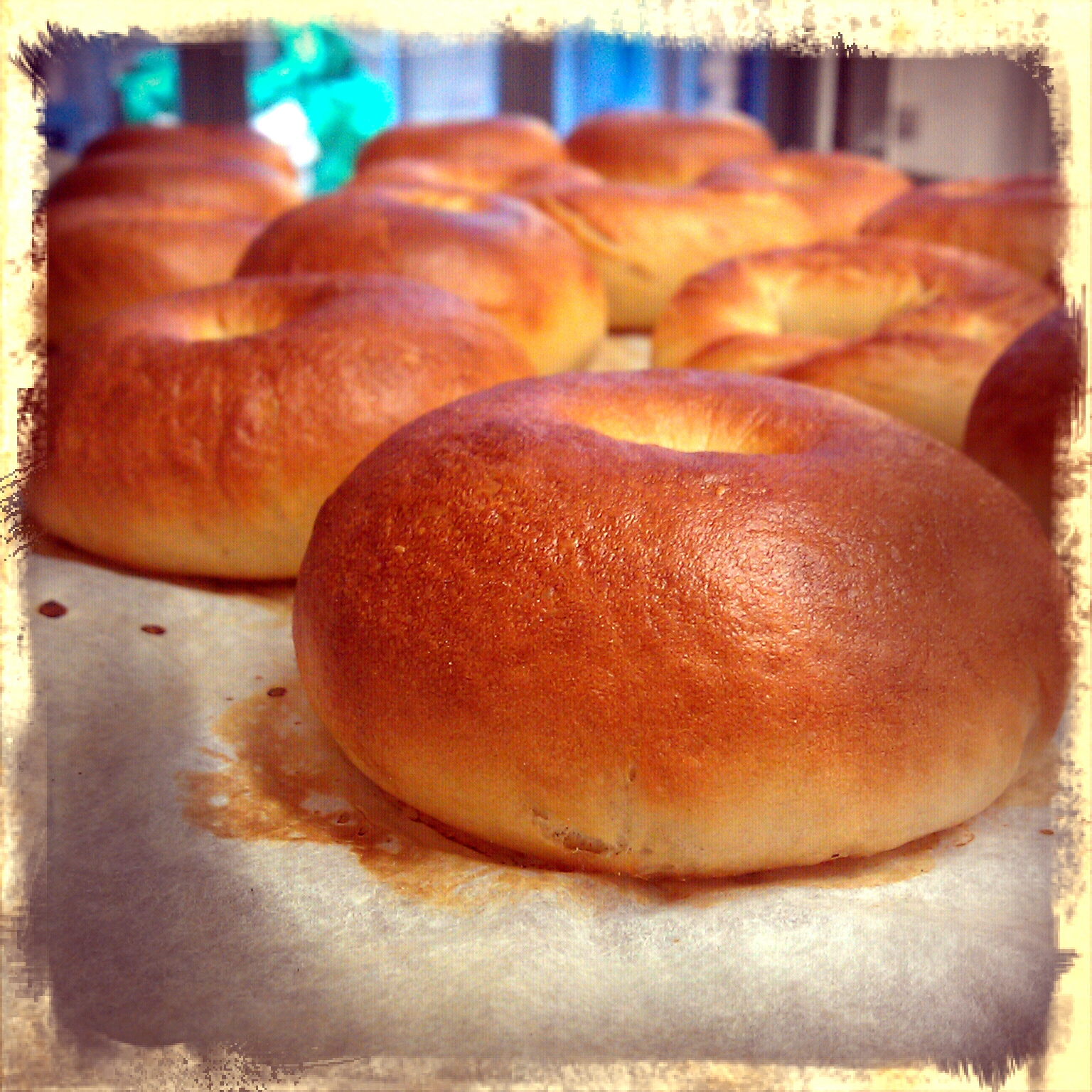 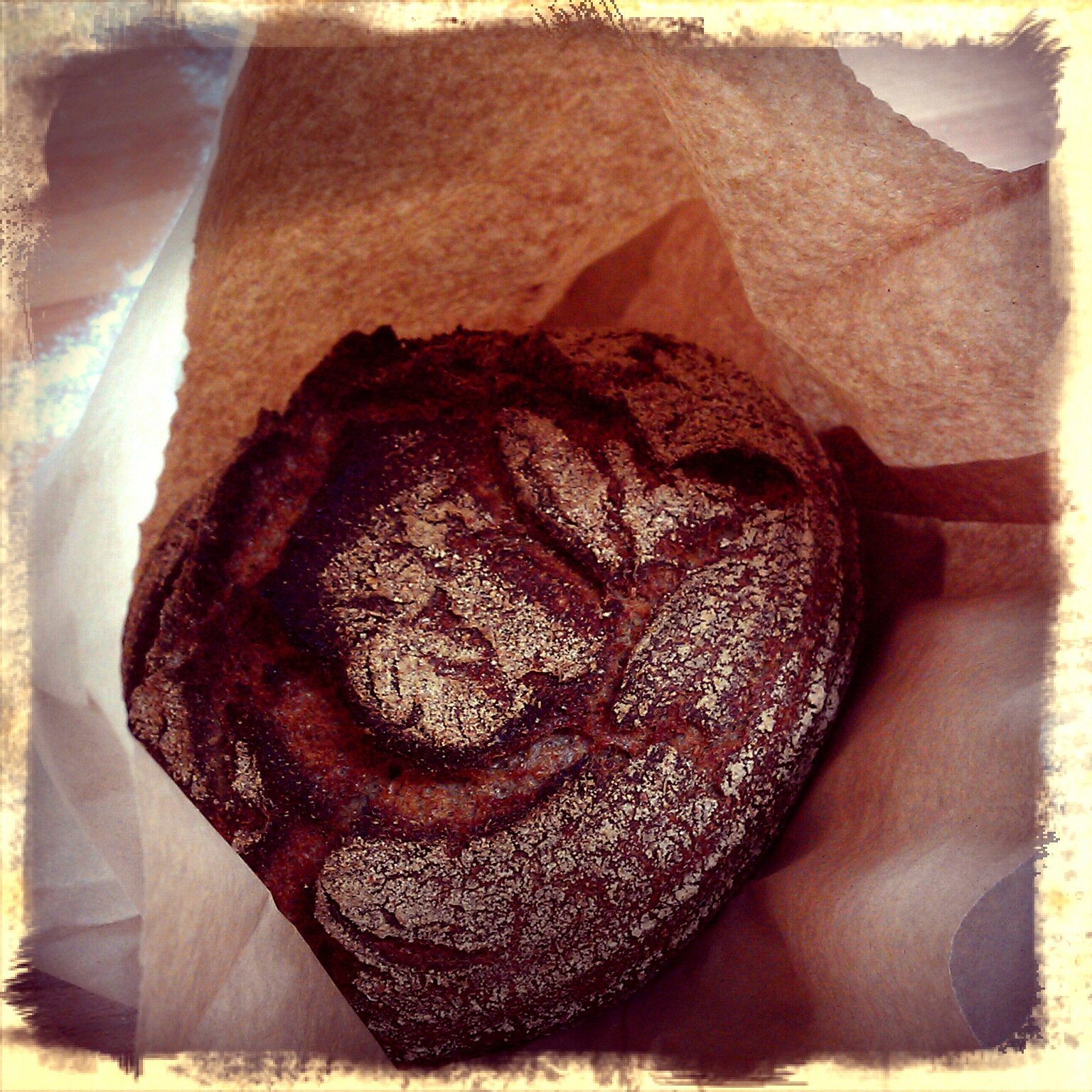 Oh, and we got some mother to take home and keep in the fridge for our continued baking attempts (it’s in the cup in the middle of all that bread). 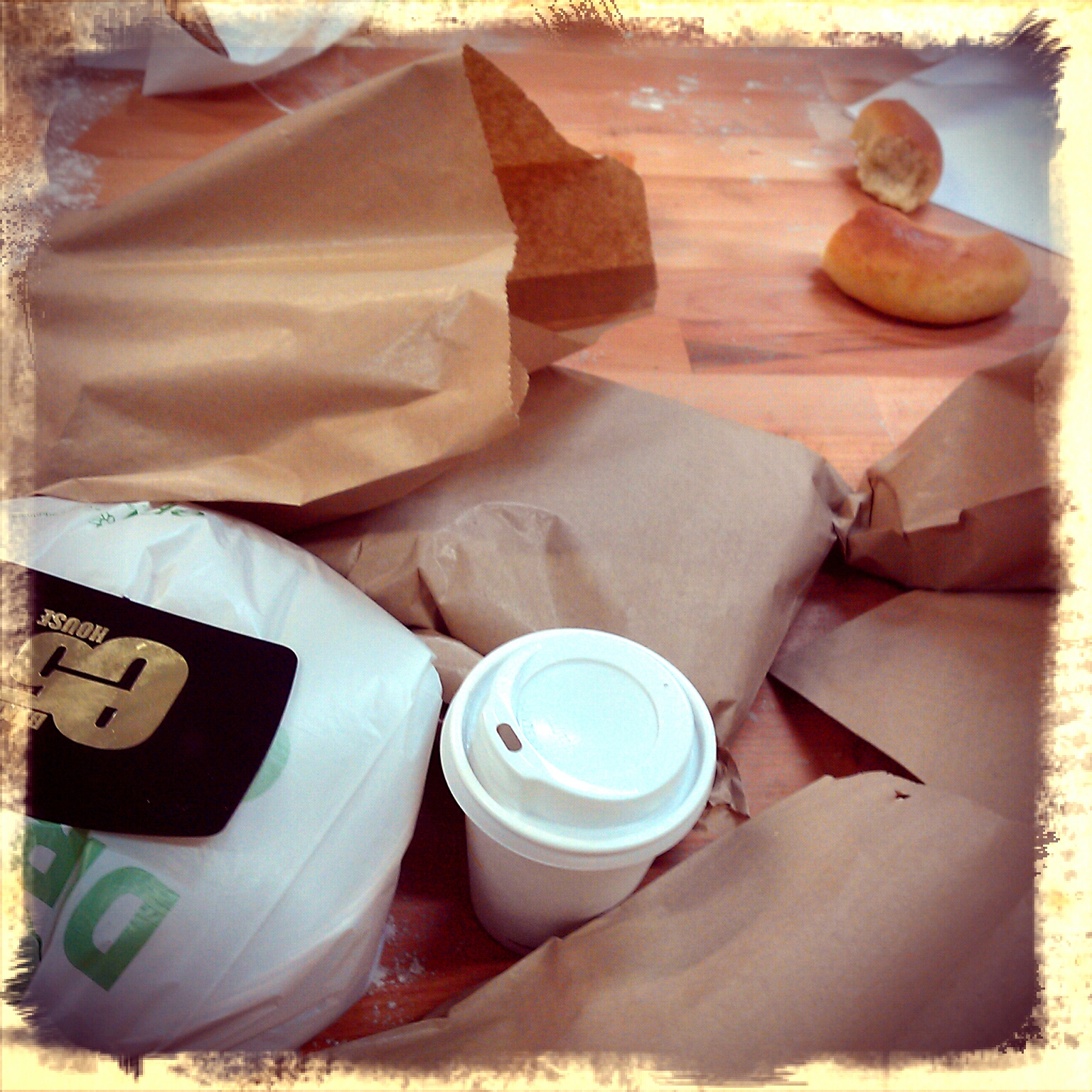 And suggestions on some good bread-baking books. At which point I felt rather pleased with myself because I had already picked up the most useful beginner’s book (according to Ben), at one of those pre-Christmas book sale promotions at work. It’s from the Bourke Street Bakery (fifth from bottom in pile) and it’s a thing that makes you go mmmmmmmm. 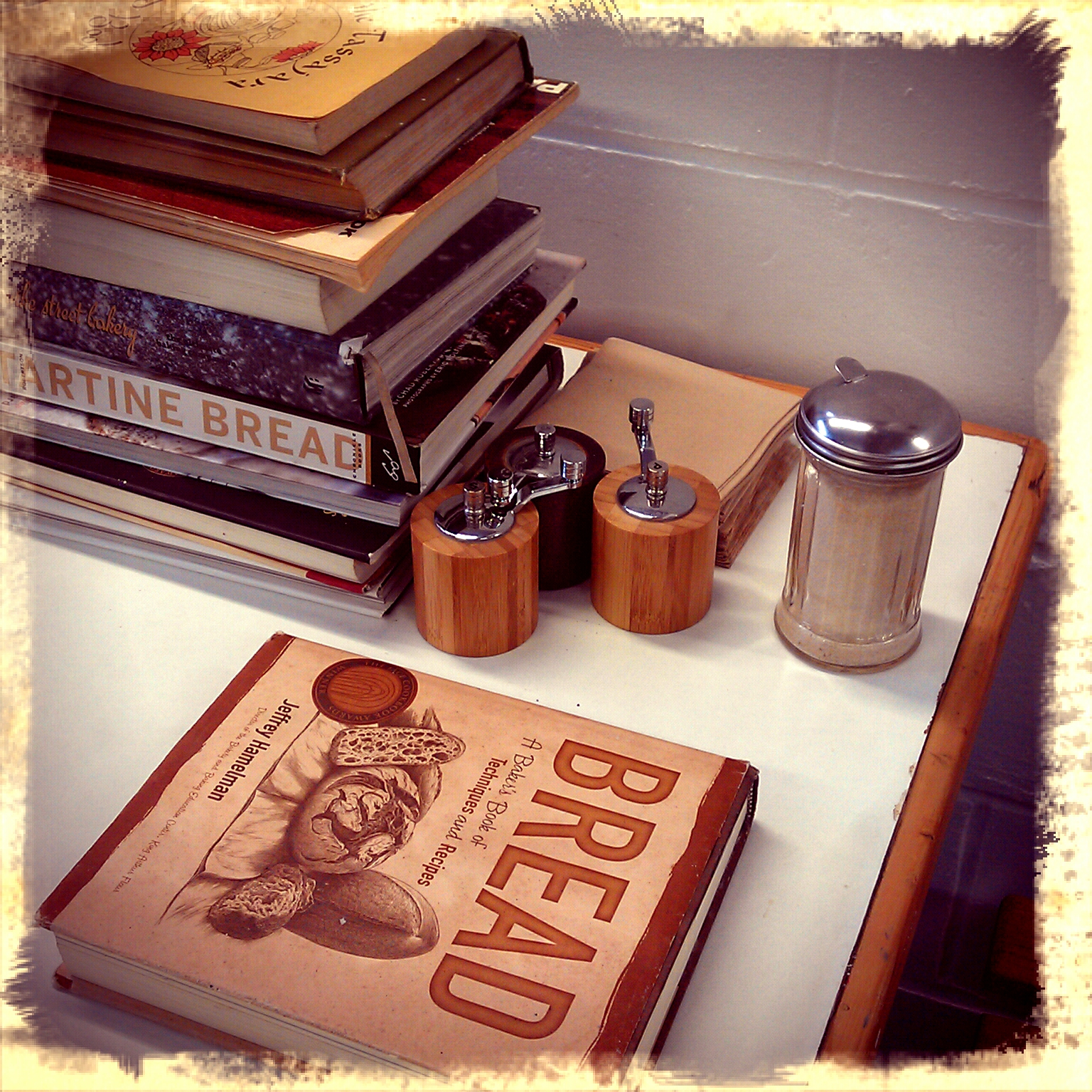 ‘But what happened to the Hackney Wild sourdough?’ I hear the more numerate among you cry. Well the fourth loaf type needs even longer to prove, so I brought it home in its banneton wrapped in a (recyclable, since Ben is pretty green) plastic bag and it sat in the fridge (sourdough dough actually needs quite low temperatures for proving) overnight, and I baked it the next morning. Using a baking tray filled with water to create steam in the oven for the first half hour. I know all the tricks now. And when I took it out it looked like this. 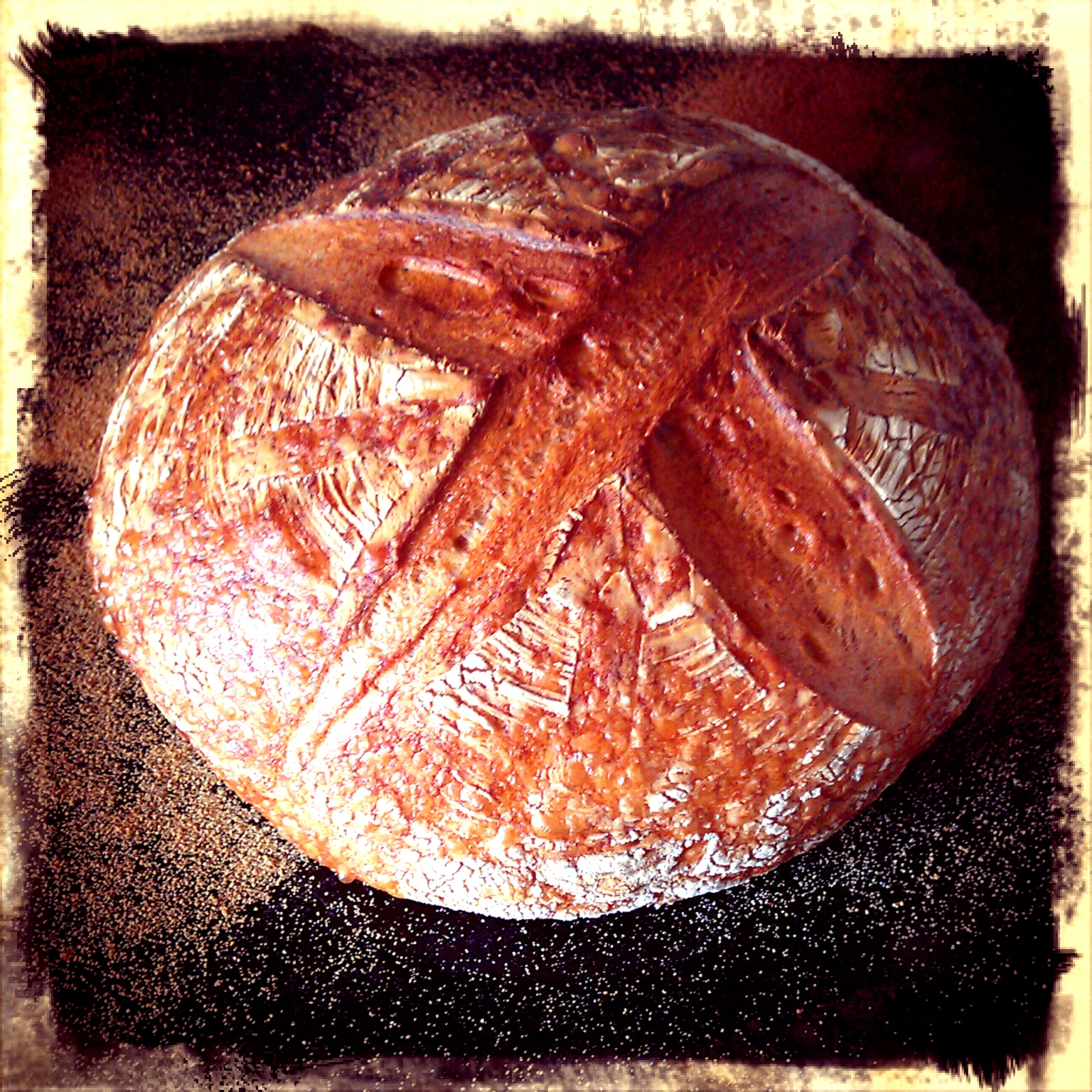 Hollywood Fact #4 In the olden days the posh folk ate the top of the loaf, while the peasants were left with the ‘trencher’ at the bottom, hence the term ‘upper crust’.

Then we made BLTs for brunch. Nom. 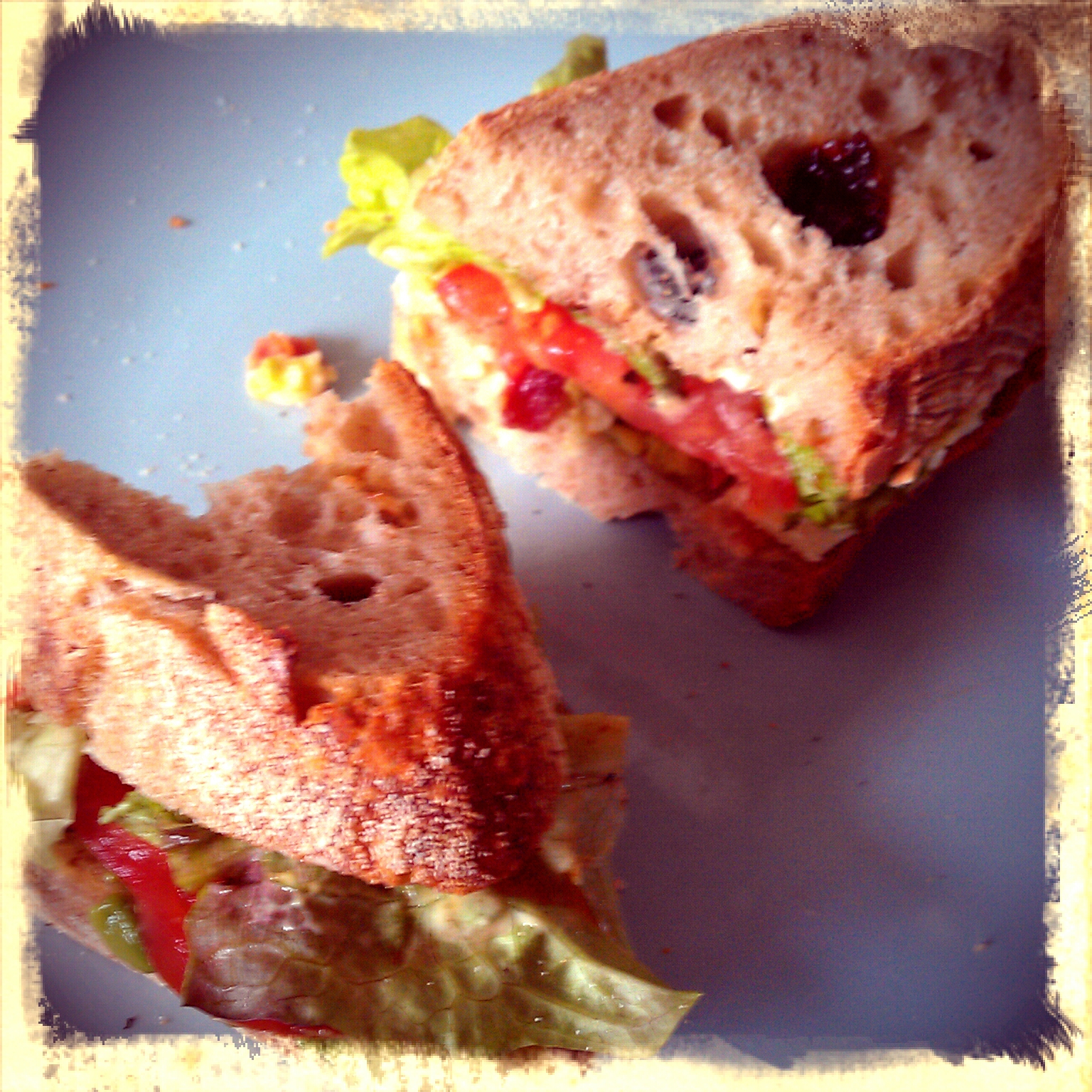 And that, dear reader, endeth the lesson.

Thank you Ben (and fellow baker’s apprentices) for a great day. And I hope it works even half as well when I try to do it all  by myself. 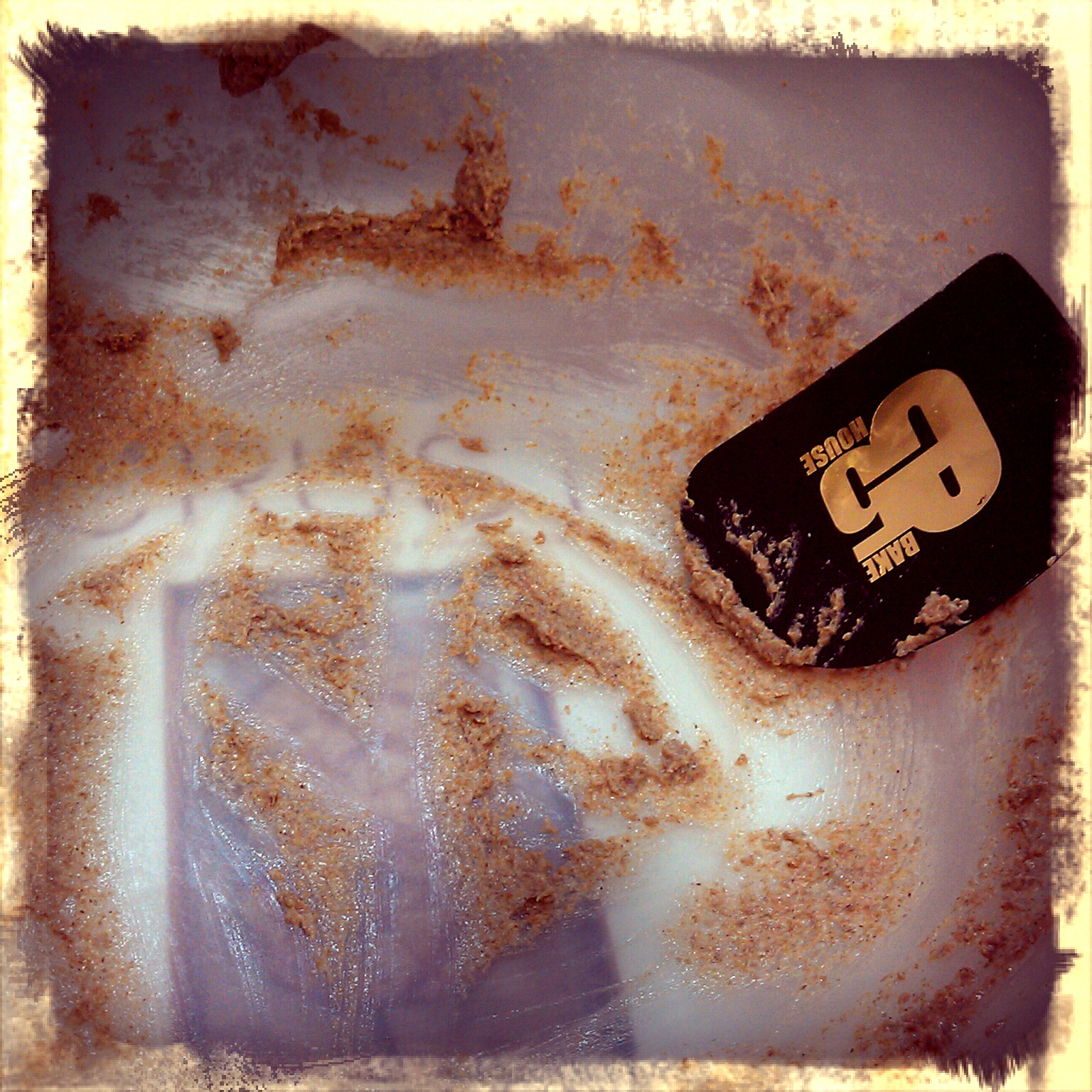