A bit of alright 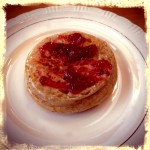 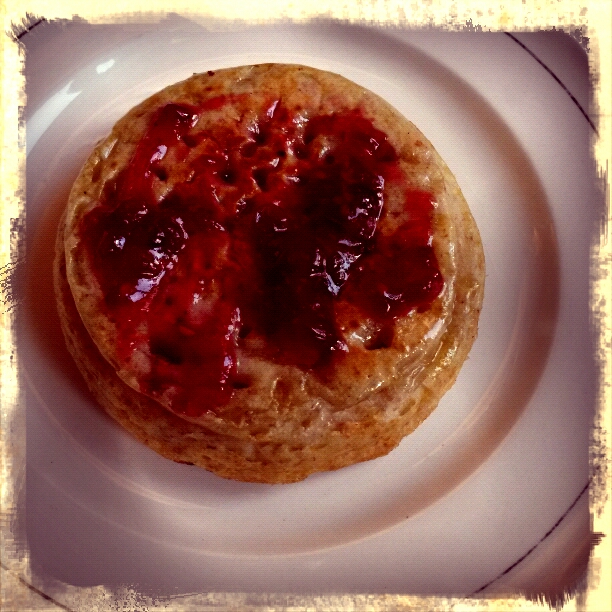 Friday night, ES Magazine on the way home. Oooh, that Rachel Khoo is tempting us with crumpets. Wonder if I could make sourdough ones? Bet I can. *Google*. Sure enough, recipes galore. Fast forward to Sunday morning and poor neglected sourdough starter gets fished out of the fridge. A bit of maths (yes, it hurt), some bicarb of soda and frying-pan action later and I have crumpets AND a well-fed starter to put back in the fridge. I love this recipe just as much for the second part of that equation as for the first.

Basically, you need the batter to be of a dropping consistency, sort of like yoghurt, but stretchier. Mix everything except the bicarbonate of soda together. Add a bit of water if it looks too stiff.

Oil a frying pan or griddle and if you have cookie cutters/pastry cutters/crumpet rings (yeah, right)/egg rings (ditto)/tuna tins with the ends cut off (mmm, fishy) you can use them to make nice neat discs (like the one in my picture). If not, you can use a small frying pan to make one big ‘crumpet’ then another (only had one pastry cutter, so made one of these too – picture not shown). The crumpet rings must also be well oiled.

Heat up the pan(s) and ring(s) and then add the bicarbonate of soda to the mix – it will start to bubble (though not much before you put it in the pan, so don’t fret if it’s looking a bit sluggish).

I then poured about 3 dessert spoons of batter into the ring, but it probably depends how thick you like your crumpet (insert preferred himbo/bimbo ref here).

Then you just let it sizzle away over a medium heat until the top loses its shine and becomes dry. This took about 5 mins, but it depends on your cooker, the pan, etc. Wriggle it out from the ring, then flip it over to lightly brown the other side.

I didn’t toast this one. Mistake. It was still pretty good, but I toasted the monster freeform one before I daubed on the butter and jam, and it provoked an exclamation of joy at first bite despite the fact that there was nobody listening.

I have just ordered a set of stainless-steel food rings from Amazon. More excited about this than I probably should be.

Here’s Rachel Khoo’s recipe for those without a jar of goo in the fridge.